thank you to all

Our first proposed fundraiser was the Malin to Mizen cycle, which was originally planned to pass through Longford on 18/4/2020, Cian’s 16th birthday. Covid had other ideas though.

So the first fundraiser that was held was my headshave. On July 4th, for my 25th birthday I shaved my head, Sinead O’Connor style! We had a little BBQ in my parents’ garden, with a few family and friends and Enda, Evelyn and Shane came over and we shaved it on facebook live. It was the first time I’d properly met the Neary family and really learned more about Cian’s Kennels and listening to the way the spoke and the dreams they had, had us all captivated. I raised €6,555, mostly through GoFundMe and a lot of social media promoting and when I handed over the cheque, I was asked to come on board to help with PR and social media and I’ve been here ever since!

Next up was the O’Boyle sisters, Elizabeth, Karen and Jane. These wonder women must be mermaids, I’m convinced! On July 15th the 3 girls each swam 3.89km (the length of an Ironman swim) in Tarmonbarry Lock in aid of ourselves, the Kevin Bell Repatriation Fund and the Ollie Cox Injury Fund. Their final total raised was €8,140. 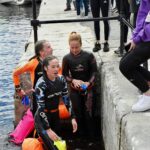 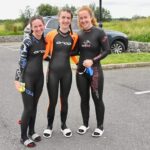 Cian’s Kennels was the beneficiary of 3 calendars.

We originally brought out our official Cian’s Kennels calendar, sponsored by Emma Plant at Happy and Healthy Veterinary Hospital. Emma ran a competition on her social media for people to enter their pets to be featured in the calendar and these proved very popular.

Cloontagh N.S., where both Cian and Shane attended primary school, also produced a calendar, with fabulous works of art from their mini-Picasso’s! They included a lovely write up about Cian and the Kennels and these calendars sold out! Principal Kay Smyth presented Shane and Evelyn a cheque for €1,500.

Finally, an entrepreneurial group of girls, Kate, Ciara, Rachel and Aileen of Mercy S.S., Ballymahon (where Cian loved attending and Shane is currently) produced a calendar as part of the Irish Angus Beef Schools Competition. They were tasked with promoting the Angus breed and they took it a step further and decided to fundraise for Cian’s Kennels at the same time!

Aisling Farrell and Leia Victory (also Mercy students) stepped up to the fundraising plate and boy did they step up! There’s a bit of a story to this one – the day Cian passed away happened to be the day of the school mass and the girls sang a beautiful song ‘Sanctuary’ at the mass. 3 days later, the girls preformed this at a packed St. Mel’s Cathedral in Longford for Cian’s funeral mass. They absolutely silenced a very emotional congregation and this song holds a hugely special place in the hearts of the Neary family – and many others. It has powerful, meaningful lyrics and the girls do a wonderful rendition. So, coming up to Christmas the girls recorded their own version and released it onto iTunes on December 22nd and managed to get to the top of the billboards! It was pretty special to wake up to on Christmas!

The Attic House Teen Project held a super Santa Paws fundraiser. Lucky dogs around Longford were treated to a stocking stuffed with treats, toys and a personalised tree ornament! 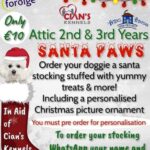 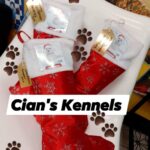 The wonderful Sinéad O’Neill held her ‘Charity Chop’ where she cut a monumental 18 inches of a ponytail off and donated it to The Rapunzel Foundation in memory of her godfather Jason, on his first heavenly birthday on January 12th.

St. Patrick’s Day saw our first ever Pooch Parade, again thanks to the Attic Teen House Project. It was a virtual 5/10km event with prizes for best dressed dog and registration included a gorgeous Cian’s Kennels doggie bandana, which Cooper can regularly be seen sporting to events. 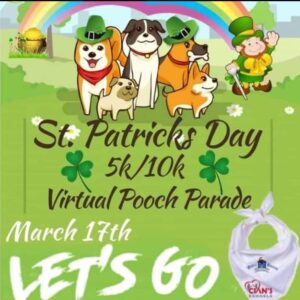 Through our connection with The Breakfast Show and Five Words to a Fortune, news of Cian’s Kennels travelled to Dublin where 9 year old Cian Geraghty set himself an almighty challenge! This incredible young man took on a full blown Iron Man over the course of 8 weeks! He swam3.9km, ran 42.2km and cycled 180.2km and he made the whole thing look easy!!

On Easter Saturday in conjunction with the Breakfast Show on RTÉ 2FM we held a Doggy Dash! We asked people to get out and about within their 5km radius and get some walkies in for an excellent cause! This was our biggest fundraiser yet and our first time to really go nationwide, largely thanks to Doireann Garrihy and Bertie!

Cian’s birthday, April 18th we launched our first in house ‘in kennels’ fundraiser – the Cian’s Kennels Hi 5 Challenge! We decided to share the video and background of our gorgeous logo and share Cian’s love of training and doing tricks with Cooper and we challenged everyone to DO the Hi5, DONATE €5 and CHALLENGE 5 others! We had so much fun with this one – everyone got involved, all sorts of pets, dogs, cats, a couple of birds, a pet lamb and some stuffed toys all made appearances! Cooper even visited Mercy S.S. Ballymahon and the Longford Garda Station to get them in on the action! 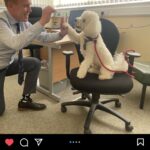 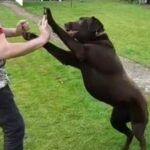 On August 22nd the O’Boyle sisters were back again with another charity swim in the Shannon, this time with Áine McWeeney in tow! The girls swam a metre for every euro raisedand so they all swam 2km and donated to ourselves, Debra Ireland and North West Stop – very worthy causes!

‘Hair Today, Gone Tomorrow’ was another successful headshave! Longford’s own Eamon O’Ceallaigh decided to get ‘hairless’ in a fundraising bid – but not only did he shave the head, he also shaved his beard off – it was the stuff of legends! We just hope if he has any need of a photo ID they can look past the hair, of lack thereof! 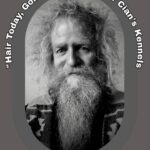 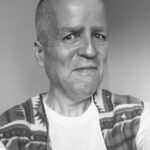 These photos represent some – not all – of the many fantastic fundraisers that have been held in aid of Cian’s Kennels! We are so grateful for every fundraiser organised and every euro donated.