a charitable organisation in memory of our son Cian

Cian’s Kennels is a charitable organisation set up in March 2020 in memory of Cian Neary, our beloved 15 year old son.

Cian loved life generally – his love of fine food, socialising with his friends & joy found in sports & team games was clear to all who knew him but his greatest love was animals, of all shapes & sizes!

Our world fell apart when Cian was diagnosed with hepatosplenic T cell lymphoma in September 2018. While in hospital in the early days of diagnosis we asked him if there was anything we could get him to make him feel better. We already knew the answer!!….. and a few weeks later Cooper, a gorgeous golden Labrador puppy joined our other dog & cat as part of our animal family. 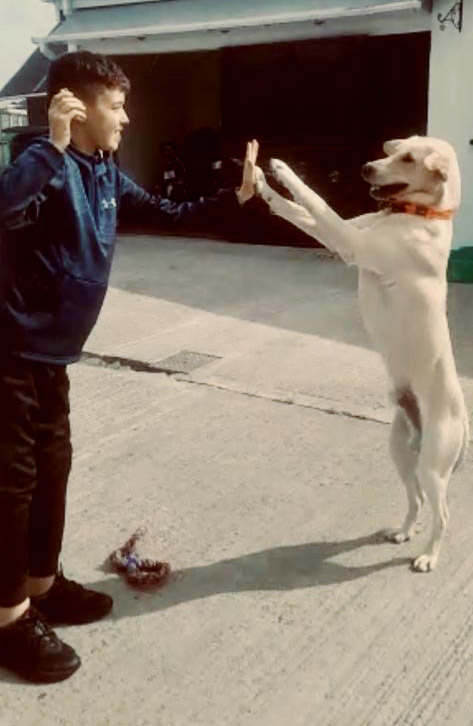 Cian was on various treatments over the next 6 months and because he was spending a lot of time at home the bond between him & Cooper strengthened. Time spent with Cooper, exercising & training him became the highlight of his days at home in between hospital stays and treatments.

Cian was about to commence on the road to bone marrow transplant when he became very ill in June 2019 and spent the next 3 months in Children’s Health Ireland at Crumlin, with the family based at Ronald McDonald House for most of this time.

When in hospital, Cian pined for Cooper. With the support and goodwill of many people and organisations, we managed to bring Cooper to Dublin and base him in kennels near the hospital. Cian visited Cooper most days, and we cannot overstate the positive impact this had for Cian. Cian remained in hospital and on treatment until the last week of his life, and having Cooper based near the hospital allowed him to enjoy many occasions & outings in Dublin knowing Cooper was safe nearby.

For us, as a family, these outings and the time Cian spent with Cooper became the basis of lasting, precious memories for us when Cian sadly lost his battle for life in the early hours of September 23, 2019.

We experienced first-hand the joy Cooper brought Cian and us during the most difficult days. We have also experienced the impact of childhood illness and extended hospital stays have on the families involved.

The Cian’s Kennels story was born with Cian in Summer 2019 when Cooper arrived in Dublin. We now hope to continue that journey in Cian’s memory by bringing pets closer to sick children and their families.

Further details of our plans and our fundraising efforts to follow so watch this space!

His story has not ended……….